Recipe of the week: Veggie pàté

Before jumping into the veggie talk this week, we’d like to share a the scary results of a new review, done by Health Canada.  In response to a significant number of pollinator mortality reports mainly from the corn growing regions of Ontario and Quebec (we live in a corn growing region!), Health Canada investigated, and found that 70% of the affected dead bee samples tested positive for residues of neonicotinoid insecticides used to treat corn seeds.  They now finally recognize a link that beekeepers have been insisting upon for years.  Here on the farm we keep bees, and rely on them as well as our native pollinators to pollinate many of our veggies (eggplant, squash, zucchini, cucumbers, etc.) and need your help to protect our pollinators, your veggies and our livelihoods! We therefore urge you to take the time to ask Health Canada and your federal MPs to ban the use of neonicotenoids, an insecticide that has been shown to have devastating effects on honey bees and native pollinators, but is very profitable to the corporations that produce them.  For more information, and to send them an email: http://www.hc-sc.gc.ca/cps-spc/pest/part/consultations/_noi2013-01/noi2013-01-eng.php
Thanks for your support!

Now, onto the veggies!  This week we give you a veggie pate recipe, partly because we love it so much and have been cooking the same recipe for years, and partly because it’s a great way to get through those veggies you’re just now sure what do with.  There are a few veggies this week that may fall into that category for some of you, so I’ll go through a quick explanation of them here, but if you’re not feeling particularly adventurous, just throw them into the veggie pate, they’ll all work!

Jerusalem artichokes– This is the only vegetab

le widely cultivated that is native to North America!  Unlike every other vegetable you will find in your basket, Jerusalem artichokes were here long before European colonization, and so is very well adapted to our climate (this is why farmers like it so much- it’s easy to grow, if not to harvest…).  It’s name has a curious history, as explained on Wikipedia:

“Despite its name, the Jerusalem artichoke has no relation to Jerusalem, and it is not a type of artichoke, though both are members of the daisy family. The origin of the name is uncertain. Italian settlers in the USA called the plant girasole, the Italian word for sunflower, because of its resemblance to the garden sunflower (note: both the sunflower and the sunchoke are part of the same genus: Helianthus). Over time, the name girasole may have been changed to Jerusalem. The English later corrupted girasole artichoke (meaning, “sunflower artichoke”) to Jerusalem artichoke. Another explanation for the name is that the Pilgrims, when they came to the New World, named the plant with regard to the “New Jerusalem” they believed they were creating in the wilderness. There have also been various other names applied to the plant, such as the French or Canada potato, topinambour, and lambchoke. Sunchoke, a name by which it is still known today, was invented in the 1960s by Frieda Caplan, a produce wholesaler who was trying to revive the plant’s appeal. The artichoke part of the Jerusalem artichoke’s name comes from the taste of its edible tuber. S 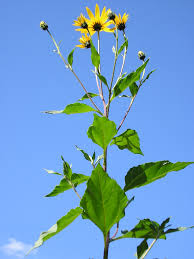 amuel de Champlain, the French explorer, sent the first samples of the plant to France, noting its taste was similar to an artichoke.”

But regardless of the origin of their name, Jerusalem artichokes can be eaten a huge number of ways.  Raw, it can be cut in sticks and served with a dip, or sliced thinly and added to a salad.  It can be boiled in soups, or prepared the same way as mashed potatoes (alone or in combination with potatoes).  My favourite way to prepare them is simply coated in oil with a dash or salt and roasted at 350’F until easily pierced with a fork.

Daikon  If ever such a thing as a ‘cult crop’ existed, it would be the daikon radish.  In permaculture circles, it’s a favourite multi-use crop, as in addition to its crisp spicy taste, it’s big, deep taproot is very effective at opening up compacted soil. In Japanese cuisine, many types of pickles and condiments are made with daikon.  Between farmers, we compete to see who can grow the biggest daikons each year.

Daikons can be prepared in all of the same ways as the more familiar spring radishes-grated in salads, chopped with dip- but also added to soups, sautés or stir frys.  Or, of course, veggie paté!

Carrots Ok, we all know carrots, but we justed wanted to point out that these funny little guys are an old heritage variety- the Red Cored Chantenay.  They have a characteristic triangle shape with large shoulder tapering quickly to a point.  Although they’re often a little less sweet than some of our other varieties, we like their taste- a real carrot taste ‘just like they used to taste’ (or so we hear from our older partners and grandparents).  It seems these days that everything is selected to be sweet sweet sweet, so it’s nice to highlight other taste experiences as well!