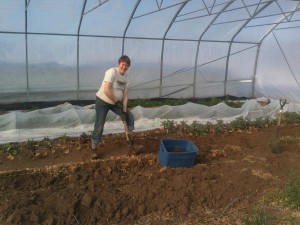 Eby coordinates the CSA for the cooperative, as well as manages our marketing and finances. She is also an amazing weeder and has a particular affinity for shoveling manure.

Eby completed a B.Sc. in Agriculture and Environment at the MacDonald Campus of McGill University and a M.Sc. in Geography at the downtown McGill campus.  In addition, Eby has four years of experience on the Board of Directors of AIDS Community Care Montreal, a community organization providing services to people living with HIV.  Most recently, she worked as Project Coordinator for the Canadian Association of Midwives. 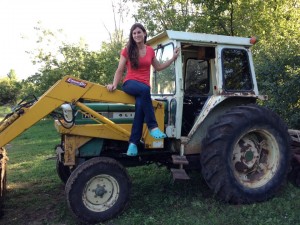 In addition to doing the tractor and irrigation work for the vegetable production, Jenna coordinates the cooperative’s greenhouse production, and manages the farm’s animals (chickens, pigs, veal calves, turkeys).

She also fixes everything that breaks, and, even better, prevents break-downs with regular maintenance. A few times a month she also dons the hat of baker extraordinaire to make cookies and amazing cakes.

Jenna grew up learning home improvement skills from her dad and built herself a shop where she learned to weld and work on engines. Jenna is currently in the final stages of a PhD program in biology at UQAM, where she is in the process of describing four species of beetles that are new to science. 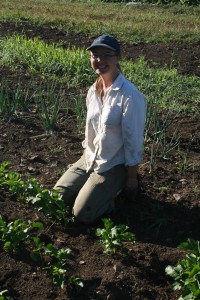 She has been farming and gardening since 2006, when she finished her B.Sc. in Environment from McGill University.  She completed an 8-month intensive internship at the Linnaea Farm Ecological Gardening Programme where she also completed her Permaculture Design Certificate. For the next two years she coordinated a network of inner-city collective gardens in Montreal.  She then spent two seasons on organic CSA vegetable farms (Ferme cooperative tourne-sol and D-3-Pierres).  In 2011, Heather also founded Les jardins de la butineuse to produce culinary and medicinal herbs on rented land.  She is thrilled to be able to develop a long term relationship to the land after moving around each year for so long.