Recipe of the week: Endive Salad with Walnuts, Pears and Gorgonzola

Happy new year to all our lovely partners!  We’re glad to be starting the year together!  After our three weeks off, I hope you’re eager for another installment of great tasting winter veggies!  You’ll get a special trial in your basket this week- endives!  You are receiving our first ever endive harvest, and we’re quite happy with the results. 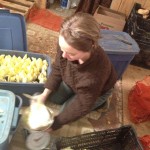 Growing endives is no easy task, double the work of most veggies.  It starts by seeding seeds directly in the field in June, and allowing the plants’ roots to grow deep and long throughout the summer.  In the fall we harvested the roots, being sure to trim the leaves but leaving a tiny growing tip, from where the next batch of leaves would regrow.  After ‘overwintering’ (ie holding the roots in the cold room for at least a month), we replanted the trimmed roots in a rubbermade bin with potting soil and kept them in the dark, in the house for five weeks.  Growing the leaves from roots in the dark is called ‘forcing’, and it prevents the development of the green chlorophyll, and produces the tender, slightly bitter white leaf clusters you will receive in your basket this week.  We hope you enjoy them- we’ve certainly had fun learning to grow them!

And on a more serious topic, January 1st of this year marked the 20th anniversary of the implementation of the North American Free Trade Agreement, the first free trade agreement to include countries of the ‘Global North’ with those of the ‘South’, and included local food production as a commodity.  This has had devistating effects on local economies in each of the countries involved (Mexico, Canada and the USA), and especially on farmers.  Over 2 million peasant farms were lost in Mexic 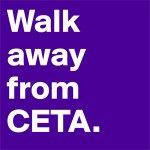 o in the last 20 years, while in Canada over 17% of our farms have disappeared in the last 5 years alone.  But we still haven’t seemed to learn from the past- another free trade agreement is currently being negotiated behind closed doors between Canada and the European Union, called the Comprehensive Economic and Trade Agreement (CETA), and farmers, and most of civil society are standing up against it.  For more information on the subject, and suggestions on easy things you can do, we’ve posted some links to articles, analyses and petitions, including an article Heather wrote on food sovereignty, free trade and migrant workers.